skip to main | skip to sidebar

Music of the Himalayas 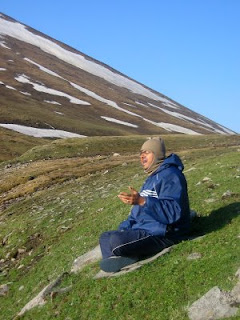 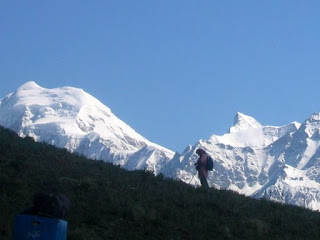 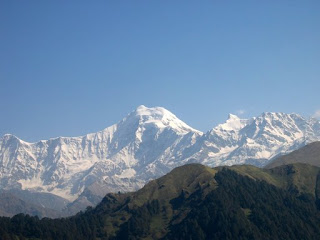 During my recent trek to the Himalayas with family and friends, I got to experience something which cannot be described in words. My attempt here may fall way short of my actual experience. Yet, I feel you guys out there, who have not been up to the mountains, should atleast hear of what it feels like there.

Haven't we very often heard of Sanyasis/ saints going to Himalayas to meditate? I think it is the touch of the soil, the very place, which is charged with energy, that elevates any one who treads on it.

The peace and silence, especially when you cross the 10,000 ft barrier is piercing. All I could hear was my own breath, the wind blowing on my face and the birds.

The route this time was a 10day trek from Uttarkashi via the most versatile and stunning landscapes of the Himalayas to the base of the Bandhar Poonch Peaks and back.

Much before reaching there, I had made up my mind that this time I am going to search for more than just pure adventure. I wanted to search within myself and regain some of my being, which I felt I had lost in the past 2-3 years.

I sat down on many occassions during this trip, unlike my last one, when i did not utilise the oppurtunity to be by myself, to meditate, practice music and pranayama.

My experience in Devkund sitting by myself, in isolation from the rest of the group, in front of the overbearing mountains, with just bees, insects, birds and my own breath making sounds was hair raising. I was able to meditate and sing for an hour and what power I could draw from the nature. I could visualise my music and make it dance to the music of the nature.

My experience in Gidara Bugiyal where I practiced by the river all my myself early morning was something. I had the river accompanying me like the tambura. What overtones I could hear from the water.

At every point during the trek, I felt my self digging deeper into myself, understanding my joys, my sorrows and walking, being OVERWHELMED at all times by the LAYA (rhythm) of nature
Posted by Voice Divine e-Calendar at 11:22 PM 1 comment: Links to this post

Compiled by Mohini Krishnan, Birmingham, Alabama under the guidance of TV Ramprasadh

1) Sambandhar also known as Thirugnana Sambandhar was born to Bhagavathiyar and Sivapada Hridayar in Sirkazhi. He was a child prodigy of the "Thevara Moovar", belongs to the 7th century A.D. He was better known as "TAALA VENDHAN" (the unparalleled King of Rhythm). When he was around three years old, his parents took him to a Shiva temple and told him to stay on the steps while they prayed to the deities. The child was so lonely, he started crying, and

immediately, it is said that the goddess Parvathi consoled him and nursed him. When his parents came back and asked him who had fed him (seeing the drops of milk on his cheek) he started singing in praise of Lord Shiva and his consort Parvathi. Through this encounter, people say Sambandhar received some “divine qualities.” When Sambandhar received his Upanayanam, he began singing in great detail about the Vedas.. He sang many verses opposing Jainism and Buddhism and brought back faith in Hinduism. He is regarded by some as an incarnation of Lord Karthikeya.

The first, second and third Thirumurai (also called the Panniru Thirumurai) which is a compilation of various Tamil poems in praise of Lord Shiva,were composed by Sambandhar, which includes his popular work - Thirukadaikkappu. Sambandhar in a short life span of 16 years, was one of the architects of the Bhakthi movement. In addition to his delightful songs, he defeated the Jain monks in debate and succeeded in bringing the hunch backed PAndya King back into the Hindu fold. He has composed 1600 pathikams (பதிகங்கள்), out of which only 384 are now available

Dr.K.R.SeethaLakshmi, Professor, Department of Music, Queen Mary's College in her article speaks of the compositions of Sambandhar -
“In the place called Thirukolakka, the Supreme Mother blessed him with "Golden Cymbals" (Thiru Taalam), which testifies for his mastery over the metrical "Saahithyam" (Thevara Hymns). Chekkizhaar, the author of "Periya Puranam" quotes that Gnana Samabandar composed multi faceted rhythmic aspects in his hymns - "Senthamizh maalai Vigarpa ..... Panninar Gnanasambandar".

The time measures that are still prevailing at present, are all found in Gnana Sambandar's Thevaram. It is an evident fact that the Thevara Padigams are metrical and the time measures were introduced according to the Kattalai.

Gnana Sambandar has contributed a lot to the realm of time measures in Tamil Music. The popular taalas of Thevaram are Roopaka, Triputa, Mattya, Jhampa, Chaapu, Ata and Anga tala. The taala is determined with the help of Kattalai. The first composition of Gnana Sambandar "Thodudaiya Seviyan" is set to be in Roopaka taala of the first Kattalai. Below are a few of his compositions that speaks for itself the variety of taala structures he has adopted for his hymns.

The "Thirutaala Jathi" of Gnanasambandar, was poured out of ecstasy with Chandam - a metrical aspect of Kattalai and other rhetorical beauties that adorns them. In this particular Padigam(Hymns) the numbers - Ondre, Irande, Moondre, Yezhae also confirms the prosodic beauty of his compositions. It signifies that the Padigam is set in the pattern of "Pari Padal" where the intricate time measures are aplenty. The rhythmic structures thaka-takita- thaka dimi etc are concurrently established in a single phrase and it would be visualized in the Paripadal song No. 30 "Thenul Theral Nee".

The layas structure of the above padigam portrays that there is an apparent and actual rhythm that glorifies. " (Dr.K.R.SeethaLakshmi)

mur. He was one of the 63 NAyanars of the 8th C.C.E. His parents died when he was young child, and he stayed with his sister Tilakavathiyar for some time. Then he joined a Jain monastery, where he earned the title Dharmasenar. He returned home to his sister after acquiring a disease. He and his sister prayed fervently at the Shiva Temple in their town. When he was cured, he began singing in praise of Lord Shiva in verses which later came to be called thevAram. He met Sambandhar as he traveled around, and they sang verses together from temple to temple. It was Sambandhar who began calling him Appar, out of respect, and he is known most famously by this name. The fourth, fifth and sixth Thirumurai were authored by ThirunAvukkarasar , He spent his long span of 80 years in social service. Out of the 4800 pathikams (group of 10 stanzas) he wrote, only 312 are available. Though most of his thevAram verses were set to metres, some were set to melodic modes of historic Tamil music, called Panns.

3) Sundarar also known as Sundaramurthi NAyanar, was one of the other 63 NAyanars. He was a ch

ild prodigy who also wrote many Shaiva Bhakthi poems. His works, called Tirupaatu, are also included in the seventh Thirumurai. Sundarar was born to a couple, who were both NAyanars themselves, but was later adopted and raised by the local king, because the king was enamored by the little boy. It is said that Sundarar was about to be married when an old man interrupted the wedding and asked Sundarar to be his servant and follower, but Sundarar, not seeing who the man really was, addressed him a mad man. The old man resumed his usual form as Lord Shiva and asked Sundarar to begin a verse addressing him as the mad man. Sundarar is known to have married twice and desired rebirth to stay with them, so Lord Shiva temporarily blinded Sundarar. One legend affirmed that when he was in Tiruvarur, he named all the future Nayanars through the Tirutthondar-Tohai . After going on a pilgrimage with the king of Kerala, he was taken up on a white elephant up to heaven. Only 100 pathikams of Sun^tharar are available The Periya Puranam which is included in the Thirumurai describes Sundarar’s life story.

Sambandar was a little boy.Sundarar, a youth in his twenties and Appar of ripe age. Their songs show perspectives appropriate to their age,Sambandar's songs has more description of buildings, nature, flora and fuana etc.. Little boys get exited when they see monkeys atop trees and fishes in the floods. - madaiyil vaLai paaya matharaar..... and .. sila manthi alamanthu maramEri mugil paarkkum thiruvaiyaarE...


4) Maanikkavaasagar was born in Vadhavoora, and came after Sambandar, Appar, and Sundarar. He contributed to the restoration of temples and faith. One legend states that a Pandiyan kin

g entrusted Maanikkavaasagar with a lot of money to purchase horses for a coming battle. On the way there, he stopped and saw an old temple which needed restoration more than the king needed horses, so he renovated and rebuilt the temple in full glory. The king put him in jail for misappropriation of funds, but Lord Shiva, who was pleased by Maanikkavaasagar’s faith, released him and taught the king a lesson on having faith. Maanikkavaasagar traveled many places and sang devotional verses called Thiruvaasakam. He also wrote the Thirukkovaiyar, and both texts are included in the Thirumurai. His compositions thiruvembAvai are also popular (MoyyAr TaDam Poygai for eg)He settled in Chidambaram and died soon after.

Posted by Voice Divine e-Calendar at 12:37 AM No comments: Links to this post

RAGAS OF THE MORNING by Tarun Jasani

Who was Purandara Daasa's Guru?

Voice Divine e-Calendar
Chennai, Tamil Nadu, India
This calendar has been developed with much care and love by Arasa Tree Entertainment , Sansar Consulting Group and hopes to bring new light to you everyday. The fascinating features on this e-Calendar include 1. Daily astronomical information 2. Three varieties of chants that can play on your system as long as you work online on your computer. 3. Theme based calendar which features composers of India and their Voice Divine. 4. The compositions of these composers have been rendered by TV Ramprasadh, a popular singer, which could be listened to, when online. 5. An RSS aggregator, to enable you to browse through many sites, at once, from this e- Calendar itself. 6. Cultural alerts about discussions on music, dance, philosophy, yoga, new book releases, interviews with your favourite musicians, dancers, writers, actors and other allied subjects. 7. Download photographs of composers, temples, artists, scenic spots in India, sites of historical and mythological importance, etc.